CONSTITUENTS NEED AN MLA THAT REPRESENTS THEM, NOT PARTY BOSSES 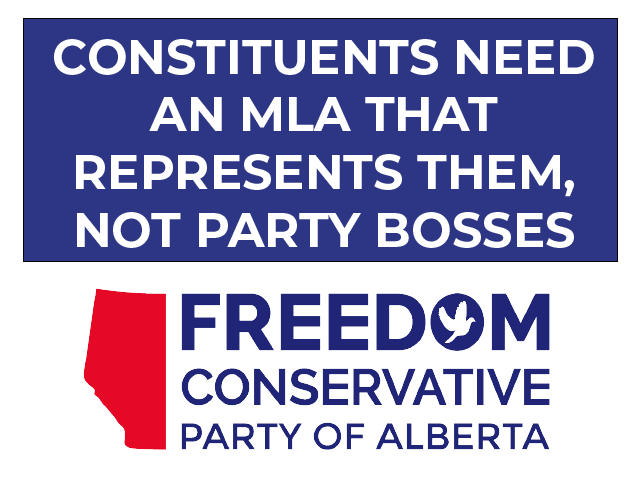 Four years ago as the Wildrose candidate for Strathmore-Brooks, I knocked on every door and told every voter the same thing: “If I am elected as your MLA, I will always vote for your interests, not for the party’s.”

I have kept that promise, even though it is not particularly for good sucking-up to party leaders.

In the four years that I have served as a MLA, I have voted against more NDP bills and policies than any other MLA in Alberta by a wide margin. To do so, several times I had to tell party leaders that I answer to my constituents, and not to them.

That is why I was the only MLA in Alberta to vote for a 5 per cent pay cut for politicians. Alberta MLAs are the best paid provincial politicians in Canada, and after 10 years of deficits under both Tory and NDP governments, I felt that it was the right thing for us to do if we are going to ask Albertans to make sacrifices. Some MLAs in other parties private agreed with me, but every single one of them were whipped to vote against it.

When the NDP botched their “social license” plan for the TransMountain Pipeline, the Tories were first out of the gate to ask Prime Minister Justin Trudeau to pay the full sticker price (nearly $6 billion) to buy the pipeline and put it under Ottawa’s direct ownership. The NDP quickly followed suit and together with the Tories, convinced Ottawa to nationalize the pipeline.

I know that several Tory MLAs privately thought that this was a bad idea; socialist even. But when it came time to vote, they were whipped into silence and toeing the party line. Again, I was the only MLA to vote against it.

Last spring, the NDP brought forward Bill 9 to ban pro-life protests in Alberta. It was a gross violation of free speech and free assembly that did nothing to balance competing rights. For me, this had nothing to do with the divisive abortion arguments, but about free speech.

Afraid of what the media and NDP would say about them, the Tories were whipped by their leader to not vote or even participate in the debate on this draconian bill. For the first time in Alberta’s history the Official Opposition abandoned its post, and for more than a month, didn’t speak a word in debate, and in a dozen votes, walked out of the Legislature to avoid having to take a position.

This was a bad bill opposed by most of my constituents, and so regardless of what any party said, it was clear what I had to do. I vote against the bill at every single stage of debate and proposed nearly a dozen amendments in an attempt to better protect free speech.

Last year the NDP brought forward Bill 14, which would provide cash subsidies to private businesses that met government targets for race, sex and gender quotas. It was possibly the most un-conservative piece of legislation that the NDP have brought forward in their four years in power. Race, sex and gender have absolutely nothing to do with who is best for a job, especially in the private sector.

While nearly all Tory MLAs knew in their hearts that this bill was against everything that they profess to stand for, they were – yet again – whipped by the party leader into voting for it. Again afraid of what the media and NDP would say about them, they voted on several occasions specifically to keep race, sex and gender quotas in the bill.

For me, the decision on how to vote was clear. Not a single constituent told me that they supported race, sex and gender quotas. They were against it, and so that is how I voted. Every time.

Parties fill a necessary role in our democracy. They help to organize like-minded people into groups that can work together to achieve common legislative goals. But parties also play a corrupting role in our democracy. Too often they become a mechanism for control over people; over other elected MLAs to fall in line; and over voters, who believe that they have no other choice.

If re-elected to serve the people of the new constituency of Chestermere-Strathmore, I will not be a liberal-lite MLA. I will not toe some party line to please the media or backroom party bosses. I will not stop at rolling back just a few easy pieces of NDP legislation, but their entire agenda from the last four years. Lock. Stock. And barrel.

In the last election, I told the people of Strathmore-Brooks that if they elected me that they would get an MLA with an uncompromising conservative voting record, and that I would always vote with them, before party. I have done that.

In the coming election, I offer hope offer the same strong conservative voice.