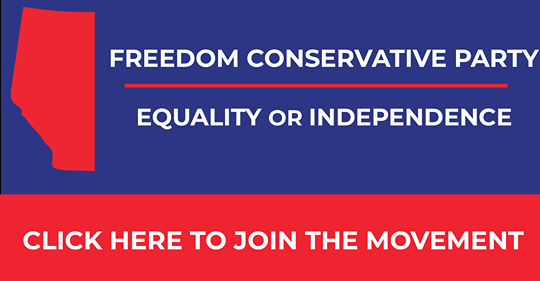 Last week, the FCP conducted a survey of its members in which: 52% supported major constitutional change from Ottawa and threaten independence should that fail, and 41% voted that Alberta should immediately hold a referendum on independence.

The FCP’s ‘Equality or Independence’ campaign calls for major constitutional reform from Ottawa to recognize equal partnership within one year from the time of the next provincial election, and should that fail, hold a referendum on independence in its place.

“Albertans are also proud Canadians and we want nothing more than to make Canada work, but the status quo is unacceptable to any self-respecting Albertan. Merely complaining and grumbling about Ottawa will do nothing unless backed by real action. That is why today I am announcing that the FCP will be championing Alberta Sovereignty, preferably inside confederation, but outside if left no other choice.

“The FCP is committed to a firm deadline for negotiations with Ottawa to recognize a place of justice and equality within confederation. While a negotiated settlement is best for Alberta, and the rest of Canada, if negotiations fail and Albertans are left only with the status quo, then Albertans should be given the opportunity to decide for themselves on Alberta independence. The FCP is committed to a strong, free, and sovereign Alberta. If that is inside or outside confederation, is up to Ottawa.” - FCP Leader Derek Fildebrandt

The FCP will be holding ‘Equality or Independence’ rallies across Alberta with dates and locations to be released in the coming weeks.

The ‘Equality or Independence’ platform is centered on a three point plan: