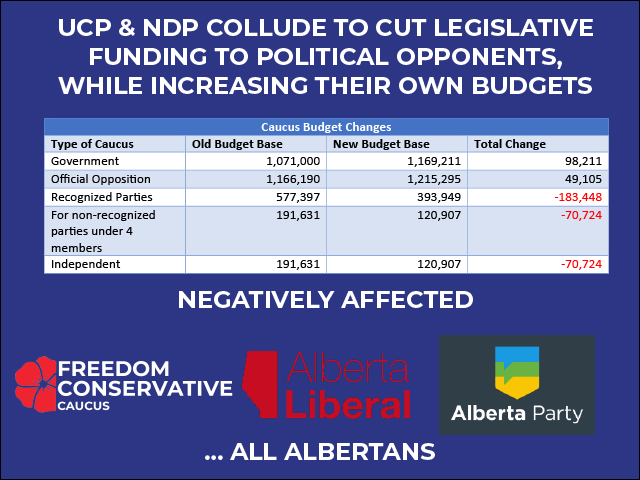 EDMONTON, AB: Today the NDP and the United Conservative Party voted to change Legislature provided funding for smaller parties in Alberta. This money is provided to help MLAs effectively represent their constituents in the Legislative Assembly, which cover the costs of staffing, printing, computer costs, and other routine expenses.

These allowances are decided on through, what is supposed to be a non-partisan committee on Members’ Services. Today, the two establishment parties, in an unprecedented showing of hyper-partisan gamesmanship, voted to significantly decrease funding for independent MLAs and to create new rules stating that a party is only recognized if there are four or more MLAs.

Currently in Alberta there are four smaller parties in the Legislative Assembly of Alberta: the Alberta Party, the Freedom Conservative Party, the Liberal Party, and the Progressive Conservative Party. There are also currently three MLAs who are sitting as independents.

“This is a bad day for democracy in Alberta. Essentially what has happened today is that the NDP and UCP MLAs have colluded together to deprive other Members in the Assembly of resources to provide effective representation for their constituents and Albertans. These committees are not meant to be used in such a hyper-partisan sense to punish political opponents, and unfortunately that is what happened here today.

For a small caucus a reduction of $70,000 is a significant cut, this represents less research resources and significant staffing restraints. This is nothing but a political attack, and nothing makes that more clear than the fact that the Government and Official Opposition have decided to give themselves increases.” – FCP Leader, Derek Fildebrandt

For Media Inquiries please email us at: media@freedomconservativeparty.ca