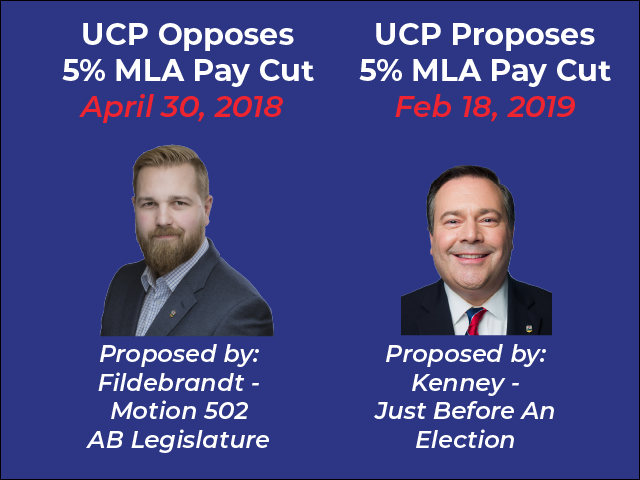 EDMONTON, AB: On Sunday the Tories promised a 5% cut in MLA pay, after voting against a 5% MLA pay cut less than a year ago. On April 30th of last year, FCP Leader Derek Fildebrandt introduced a private members motion to cut MLA pay by 5% which was met with silence from both the NDP and the Tories. The motion was defeated with all establishment parties voting against (including the UCP).

At the time, FCP Leader Derek Fildebrandt stated that several Tory MLAs privately supported the pay cut, but were under orders to stay silent and vote against it. In response, Tory Leader Jason Kenney made personal attacks and said that it wasn’t the case.

“Imitation is the sincerest form of flattery, but plagiarism needs to be called out. Did they oppose a 5% pay cut in April, but support one now? Did they support it in their hearts, but couldn’t bring themselves to support something that wasn’t their idea? No party has a monopoly on good (or bad) ideas, but it is petty and childish to only support something if it is proposed by yourself.”

“Before the election is already called, the FCP is forcing the Tories to take more conservative policy positions, so we are pleased when our ideas are adopted.” - FCP Leader Derek Fildebrandt